But the free gift is not like the offense. For if by the one man’s offense many died, much more the grace of God and the gift by the grace of the one Man, Jesus Christ, abounded to many. And the gift is not like that which came through the one who sinned. For the judgment which came from one offense resulted in condemnation, but the free gift which came from many offenses resulted in justification. For if by the one man’s offense death reigned through the one, much more those who receive abundance of grace and of the gift of righteousness will reign in life through the One, Jesus Christ.

Therefore, as through one man’s offense judgment came to all men, resulting in condemnation, even so through one Man’s righteous act the free gift came to all men, resulting in justification of life. For as by one man’s disobedience many were made sinners, so also by one Man’s obedience many will be made righteous. Moreover the law entered that the offense might abound. But where sin abounded, grace abounded much more, so that as sin reigned in death, even so grace might reign through righteousness to eternal life through Jesus Christ our Lord. — Romans 5: 15-21

Even though there is chaos, confusion and anarchy rampant in our nation today, Jesus Christ, by His grace is ready and willing to give you His free gift of eternal life! 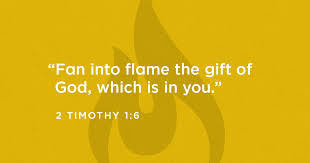 But just how important is the Holy Spirit?

No matter how much you may shun the Holy Spirit, if you are a child of God, you always have Him in you!

Jesus let the Pharisees know in no uncertain terms how important the Holy Spirit was when they were very near blaspheming the Holy Spirit. Mark 3:28-29 “Assuredly, I say to you, all sins will be forgiven the sons of men, and whatever blasphemies they may utter; but he who blasphemes against the Holy Spirit never has forgiveness, but is subject to eternal condemnation” —

God is love and He sent His Holy Spirit to give us the same love. Romans 5:5 Now hope does not disappoint, because the love of God has been poured out in our hearts by the Holy Spirit who was given to us. John 14:26 But the Helper, the Holy Spirit, whom the Father will send in My name, He will teach you all things, and bring to your remembrance all things that I said to you.

1 John 5:20 And we know that the Son of God has come and has given us an understanding, that we may know Him who is true; and we are in Him who is true, in His Son Jesus Christ. This is the true God and eternal life.

We all need the Holy Spirit. He does all kinds of things for us every day. He gives us understanding of God’s Word. He prays for us about things we don’t even know about. He reveals knowledge, understanding, and wisdom. He is the one who comforts us when we are persecuted. He is the power of our faith! We need Him very much!

I pray that the Holy Spirit will comfort you! Amen!